Originally from San Diego, CA, Gabe spent most of his teenage years in Sandy, UT where he developed a love for all things within the entertainment industry.  Since then, his interests have taken him from radio broadcasting, to stage acting, to television broadcasting, to film acting where he later received his BFA in Acting from Brigham Young University.

As of December 20th, 2013, he has been married to his best friend, Lauren, who is currently studying Pharmacy at the University of Utah.  Together they enjoy hiking, traveling, Netflix, and going for long motorcycle rides on their Honda Shadow, ‘Ramona’ and their BMW R1200C, ‘Ilsa’.

Some of Gabe’s hobbies and other interests include racquetball, snowboarding, snorkeling, gaming, and acquiring rare and collectable religious art.

Once his wife graduates from the University of Utah, Gabe plans on traveling to Los Angeles to further pursue his dream of a career in entertainment. 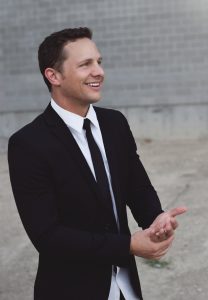